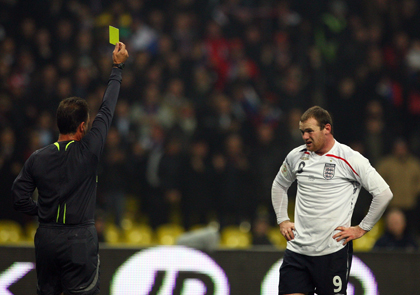 We donâ€™t want to sound like a baying mob after blood the moment our Euro 2008 hopes seem to have disappeared â€“ but surely someone is going to be made a scapegoat.
As far as we can see there could be six main culprits responsible for ruining next summer. Steve McClaren seems the obvious choice (if not the FA for appointing him in the first place) but Pies isnâ€™t one for knee jerk reaction â€“ so where else can we point the finger of the blame?
Click through to vote for the most likely candidate

Did the plastic pitch play a part? Could Paul Robinson have done better than parry the ball into the path of Pavyluchenko for the second goal? Should Steven Gerrard and Micah Richards have taken their chances? Did Wayne Rooney or the referee play a bigger part in the penalty? Or was Lady luck just not looking down on us?
Let us know whose face should be on the burning effigy if, as most of you think, we donâ€™t qualify for the finals?