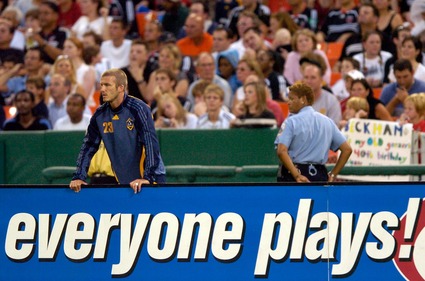 So how to review David Beckham’s first season in the MLS? Well, it was hit and miss, wasn’t it? Mostly miss to be honest. Becks played just 252 minutes all season (Landon Donovan played 2191 minutes) and didn’t score a single league goal, but still picked up a guaranteed $5.5m in wages. And LA Galaxy didn’t make the post season.
On the plus side, Beckham’s arrival has generated huge attention and revenue â€“ merchandising, advertising etc. â€“ and attendances across the MLS are up on 2006. The money men will be generally happy with the way his first season has gone, but in terms of on-pitch performance, Beckham has been a dead duck, injured most of the time. Fans who paid for tickets to games that had been advertised on the back of Beckham’s appearance often had to settle for the sight of MLS’s saviour dressed in a suit, waving like royalty from the stands.
That’s what I think – but what do you think? Vote after the click or leave a commentâ€¦