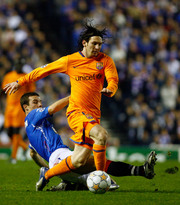 Little Lionel Messi, probably the best player in the world right now, has accused Rangers of playing ‘anti-football’, after the Scottish club held Messi’s Barcelona to a 0-0 draw at Ibrox on Tuesday in the Champions League. Messi said: ‘It’s incredible. Rangers didn’t want to play football. They practised anti-football from the first minute and it’s a shame we couldn’t take victory because we created a good number of chances. We just didn’t put them away. I think that when they come to the Nou Camp everything is going to be very different.’
Fighting talk from the young Argentine. So Rangers may not be the most attractive team in the world, but to accuse them of playing anti-football (whatever that might be) is a bit harsh. Does Messi have a point, or should he shut his mouth?