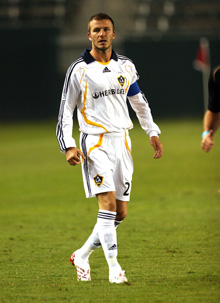 Steve McClaren has travelled around 5,000 miles to watch David Beckham play in a charity match against Vinnie Jones’ Sunday league team, Hollywood United.
The team is mostly made up of ex-pat amateurs with a sprinkling of old pros like Frank LeBeouf and Alexi Lalas, and celebrity players like former Sex Pistol, Paul Cook, and actor Anthony LaPaglia. Not exactly a stern test of Beckâ€™s fitness then.
Thereâ€™s also some uncertainty over whether McClaren had discussed the LA trip with the FA and the whole thing has been condemned as â€˜farcicalâ€™ by ex-England captain Terry Butcher.
McClaren assumingly needs to get an idea of Beckhamâ€™s fitness before the friendly against Austria on November 16th and our final qualifying game against Croatia five days later â€“ but how much will he have learned after the Galaxy beat Hollywood 10-4 (even if Becks did score two and set up three)?
Is McClarenâ€™s â€˜escape to LAâ€™ key to Englandâ€™s final preparations or could he just be using up the expense card before heâ€™s out of a job? â€“ Let us know what you think