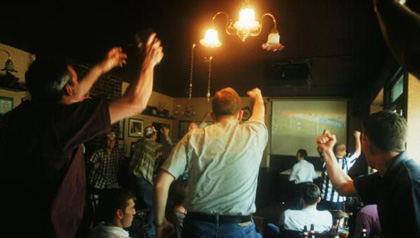 Since the â€˜Sky fell inâ€™ and I found that I couldnâ€™t watch Premier League games at home as dishes (no matter how mini) are not allowed on my building, Iâ€™ve been forced to get my football fill at the pub. And, although I can’t knock the alcohol and atmosphere, there’s some things that are starting to wind me up.
1. Unless you turn up two hours before kick off and place a towel over one of the stools youâ€™re not guaranteed to get a good seat.
2. If you ever do get a good seat you can bet that someone as tall as Peter Crouch will turn up just as the game has started and stand right in front of you.
3. Trying to avoid the half time rush for the toilets by leaving five minutes earlier often results in missing a goal â€“ and then being told itâ€™s somehow your fault when you return 1-0 down.

4. If the screen is wall mounted youâ€™re either standing up, shuffling from foot to foot, or sat down with a cricked neck that leaves you looking skywards for a week.
5. Itâ€™s always an effort to ignore the loudmouthed know it all (usually an Arsenal supporter) boring his so-called friends with his take on what heâ€™s read in The Sun that morning.
6. If you think Sky is expensive then compare the per-game cost to buying four pints of lager, two packets of pork scratchings and ten Malboro Lights (thatâ€™ll youâ€™ll have to brave bad weather to smoke).
7. The management donâ€™t always want to watch the same game â€“ most annoying when you turn up just before kick-off to watch United only to find out theyâ€™re showing Liverpool.
8. Unless youâ€™re in a Sports Bar, thereâ€™s no time spared for watching the build up â€“ at least not without the sound muted and some places even leave shit music playing while the gameâ€™s on.
9. Thereâ€™s always the chance that youâ€™ll be outnumbered by opposition supporters of the angry persuasion â€“ meaning you risk probable harm if you win, or have to keep tightlipped and take it if you lose.
10. With a Premier League game on Mondays, Champions League on Tuesdays and Wednesdays, midweek hangovers are starting to take their toll while a diet of peanuts isnâ€™t ideal
Let us know of anything you can’t stand about watching the game at the boozer