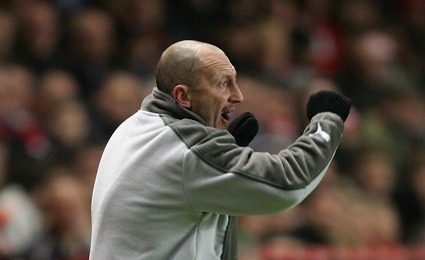 Pies hero Ian Holloway has expressed concern that Manchester City midfielder Stephen Ireland could replace him as football’s number one nutcase. Ollie’s bizarre rants have endeared him to thousands of fans and led to him being adopted as Pies’ favourite manager. But he is worried that his outbursts just aren’t crazy enough to keep up with the new generation of footballers emerging with a screw loose.
The Plymouth boss said in his BBC column that Ireland – fresh from pretending his grannies have died and showing off his Superman pant to millions – would easily beat himin the crazy stakes. He said: “He’s a complete fruitcake, that bloke, isn’t he? We’ve got to be careful with him, he’s after the old crazy mantle and he’s going to win it hands down.” Don’t worry, Ollie – you’re the only football nutter for us!