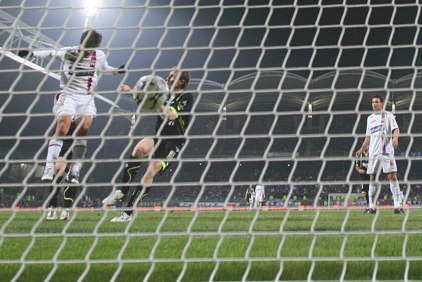 Lyon continued their march towards a seventh successive Ligue 1 title with victory over Valenciennes. Goals from Juninho and Sidney Govou gave them a 2-0 win. The champions have found their form after a shaky start and are now undefeated in 10 games. Surprise package Nancy are proving difficult to shake off and remain only four points behind with a game in hand. They kept up the pace with a 1-0 win over Bordeaux.

Check out the action from this week’s Ligue 1 fixtures:

Lens boss Jean-Pierre Papin is not a hit with his players according to The Guardian. They report: “His Glenn Hoddle-esque habit of reminding them all how great he was as a player hasn’t gone down too well, for some reason. After training, the players have to attempt ‘The Crossbar Challenge’ and strike the woodwork from five, 10, 15 and 20 yards. The worst performer gets to wear a T-shirt with “Tosser of the Week” on it, but the exercise’s only value seems to allow Papin to show his players that he still has it.” Oo er!