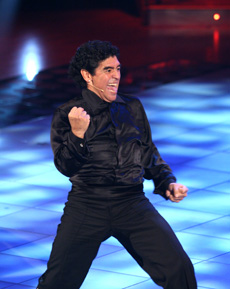 Dirty Diego took his fancy footwork to the dance floor when he appeared in Italian TV show Dancing with Stars months after having extensive stomach surgery to reduce his ballooning weight.
He later quit the show after three episodes since he was forced to hand over his earning to the Italian authorities for unpaid taxes dating back to his time at Napoli â€“ but the memory lives on with this picture, which we think screams:
â€œIâ€™ve strictly comeâ€¦dancing!â€
Let us know if youâ€™ve got a better description for the dancing feet of God or suggest the song he’s getting down to