Sadly all the football in Italy this week was overshadowed by the shooting of a Lazio fan and subsequent rioting across the country. Lazio fan Gabriele Sandri, 25, was shot by a policeman while sitting in his car at a motorway service station in Tuscany during a fight between Lazio and Juventus fans. Lazio’s match at Inter Milan was called off prompting rioting in the city. Fans across the country followed suit after hearing of Sandri’s death sparking a series of clashes.

On the pitch, the reduced fixture schedule saw Udinese emerge as the weekend’s main winners. The fifth-placed side beat second place Fiorentina 1-2 away, while the side above them, Juventus, were held to a 2-2 draw against Parma.
Juve’s draw with Parma was one of the more incident-packed games this week, so you might like to enjoy it in a bit more detail:

And after a heavier than usual Gazzetta, here is picture of Adrian Mutu wearing what appears to be a hair-net against Udinese. Is that better for you? [Via Italy Offside] 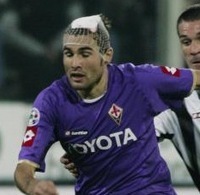