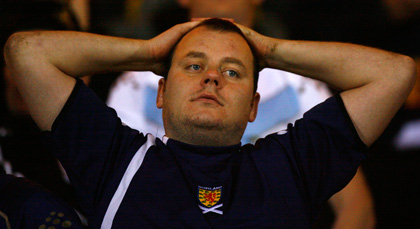 Before the weekend it looked more likely that the Scots would be going to Euro 2008 while England would be left back at home â€“ probably throwing darts at a pull out of Steve McClarenâ€™s head.
But, in a dramatic turn of events, Scotlandâ€™s bravehearts fell to a last minute goal from Italy while England live to play another day courtesy of Israelâ€™s surprise win over Russia.
Before we offer a soggy shoulder to our skirt wearing cousins though, let us tell you that 72% of Scots voted to send Russia through at Englandâ€™s expense while 80% of English respondents to the same poll wanted to see the Tartan army go through.
Itâ€™s a tribal divide that we thought existed with the Scots seemingly more willing to wish bad luck on England than we do against them. So, now feel free to leave any words of consolation or otherwise for the unlucky Scottish supporters.