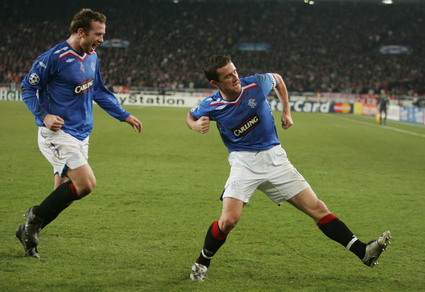 Entertaining match, this, and although Rangers lost out to the German champions, they still have a very good shot at qualification â€“Â Barcelona’s 2-2 draw at Lyon means that Rangers need only a draw (a dangerous scenario, nonetheless) when the French club visits Ibrox next month to progress.
Substitute Charlie Adam opened the scoring with a composed finish when the ball dropped at his feet inside the box, but Stuttgart hit back with two goals to take the lead: Cacau’s superb back-flick levelled the score just before half-time, then Pavel Pardo put the Germans in front (young Alan McGregor should have saved the shot), midway through the second half. Barry Ferguson equalised before Ciprian Marica volleyed home the winner with five minutes left to play.
Watch the goals/post-match analysis after the clickâ€¦