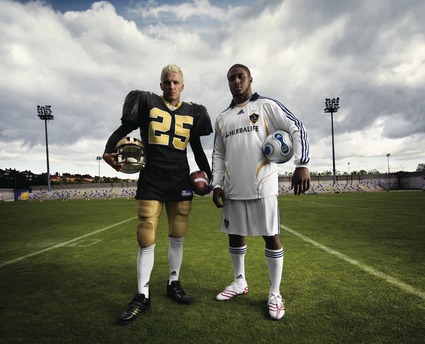 Sister Shiny site Scrumbag (try saying that after a bottle and a half of Calvados) posted recently on the topic of David Beckham and odd-shaped balls. Naturally, I clicked on it, only to find a semi-serious debate on whether Becks could have a career in rugby. This opinion is based on the recent PR stunt in Australia, when Beckham ‘hoofed’ some Aussie rules & rugger balls into Sydney Harbour.
There’s no way Beckham could make it in rugby or Aussie rules, simply because they don’t have designated kickers. However, I’m sure he could do well in American football, a sport that does have that specialist position. Kickers can keep going into their forties (see kicking legend Morten Anderson, who at 47 is currently the oldest active player in the NFL) and I see no reason why Beckham couldn’t make the switch from ‘soccer’ to ‘gridiron’ in his mid-thirties. Any NFL team would love a player with the global appeal of Beckham, who is, for all his faults as a player, still one of the best dead-ball strikers in the world, if not the best.

The problem Beckham might have is that his body shape and run-up causes him to strike a ball with a significant degree of curve on it – that doesn’t really play in American football, where it’s better to strike a clean, straight ball. I’m sure Beckham has the skill to compensate for that, and I’d certainly be fascinated to see him try. He’d have the length to kick 55-60 yard field goals, at least according to fellow Adidas sports star Reggie Bush, who teamed up with Beckham earlier this year (see photo, above).


Do you think he could make it in the NFL, as a kicker or even punter?