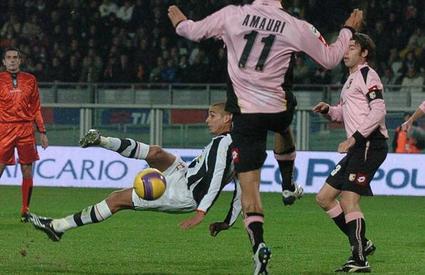 Juventus moved themselves up to second in Serie A with a 5-1 thumping of Palermo. The Old Lady was in unstoppable mood with David Trezeguet, Vincenzo Iaquinta, Alessandro Del Piero (two) and Marco Marchionni finding the net.
Inter Milan stayed top, three points clear of Juve on 28 points, following their 2-1 win over Atalanta.

Check out this cracker from Andrea Pirlo against Cagliari. We have used up our pearler from Pirlo pun quota for the year, but pick that one out of the net!

Juve’s Del Piero and Marchionni decide to make Sunday’s game against pink-clad Palermo officially the campest match of all time.

Meanwhile, in Serie B there is a fairytale/dodgy film script in the making in the shape of tiny pacesetters AlbinoLeffe. Paolo Bandini tells all here.