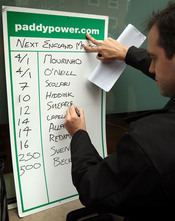 ‘The biggest football job in Europe and in the world is to be the England manager.’
Sven-Goran Eriksson, November 2007
I respect Sven’s opinion, but I think his quote is mere hyperbole. Forty years ago, maybe it was true, but surely there are bigger management jobs in world football these days? To manage any of Europe’s genuinely big clubs â€“Â Real Madrid, Barcelona, AC Milan, Juventus, Man Utd â€“ is regarded as more prestigious than the England job. And in international terms, the Brazil and Argentina gigs are bigger too, not to mention vastly more successful European nations like Germany and Italy. Don’t you agree?
The tabloids like to think the England job is massive, and they make it so in their own, self-serving worlds, but how can a job managing a nation that isn’t even in the Top 10 in the world be classed as the biggest?
Vote after the jump on which management job you think is currently the biggest in the worldâ€¦