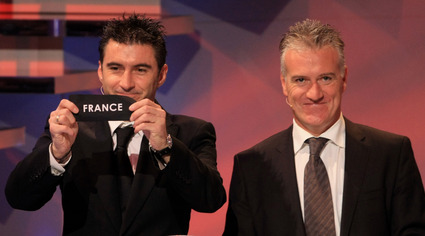 Didier Deschamps (right) tries to fake a smile as Theo Zagorakis draws France in the Euro 2008 Group of Certain Death (see below).
GROUP A Switzerland, Czech Republic, Portugal, Turkey Probably the weakest group. I tip Portugal and Switzerland to progress.
GROUP B Austria, Croatia, Germany, Poland Germany and Croatia should go through comfortably.
GROUP C Holland, Italy, Romania, France Ouch. Romania are f**ked, that much I do know â€“Â I tip Holland and Italy to go through, with the French missing out.
GROUP D Greece, Sweden, Spain, Russia Spain will be fairly happy with this group, which is perfectly winnable. Any of the other three will fancy their chances of making the quarter finals. Sweden gets my vote.
Each of the four Euro 2008 groups looks competitive, although one stands out like a very sore thumb – the one with France, Italy and Holland in it (and poor Romania, who must be wondering why they bothered to go through the qualifying process if this is their ‘reward’.) That’s some Group of Death. Uefa’s illogical seedings system put world champions Italy among the second seeds and France in the four bottom seeds. Yeah, that makes sense.

No wonder that French coach Raymond Domenech is so pissed off. ‘I have to say the way the seedings are worked out is madness,’ he moanded after the draw. ‘Not to have Italy, as the world champions, in the first pot is crazy. I would also have preferred to have played in Austria and not Switzerland, because we would have been hassled less. I am not happy, nothing I wanted has worked out.’
Domenech should take a leaf out of the book of Romania coach Victor Piturca, who was able to see the funny side of his nation’s terrible luck: ‘For us it’s a very nice, easy group,’ he joked.
I feel bad for the Dutch more than the French. Marco van Basten’s team were one of the top seeds but ended up with the 2006 World Cup winners and runners-up in their group. For them, it couldn’t have been any worse.
(By the way, Croatia boss Slaven Bilic tried to claim that his side’s group is the toughest, but no one buys that â€“ Austria may be at home, but they are utter shite. Poland are no world beaters, either.)