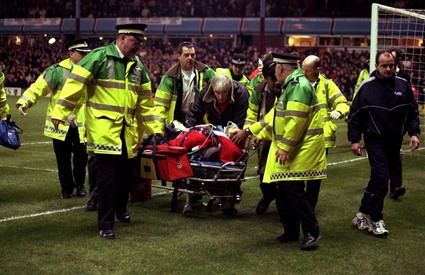 December 1998 A parachutist in a Santa Claus costume is stretchered away after crashing into the Trinity Road Stand during his descent, breaking both his legs and falling 100 feet onto the perimeter track during halftime in the FA Carling Premiership match between Aston Villa and Arsenal at Villa Park.
Photo Clive Brunskill /Allsport