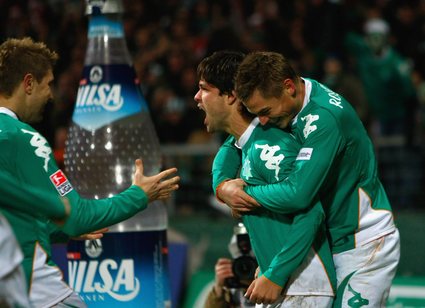 A second 0-0 draw in succession means Bayern Munich are clinging to the top of the Bundesliga table. Werder Bremen moved level on points with Bayern following their 5-2 victory over Bayer Leverkusen. Brazilian starlet Diego was on target for the second goal before picking a fight with a giant bottle of water (pictured).
Bayern failed to find the net against bottom club MSV Duisburg in an otherwise high-scoring weekend. Cottbus beat Hannover 5-1 and Wolfsburg defeated Borussia Dortmund 4-0.

Nobody could accuse Oliver Kahn of not taking time out for his fans around the globe. Here is his ‘exclusive’ interview with Iran Sports Press in full:
Reza Ghazinouri: Mr. Kahn would you mind to answer us just two questions?