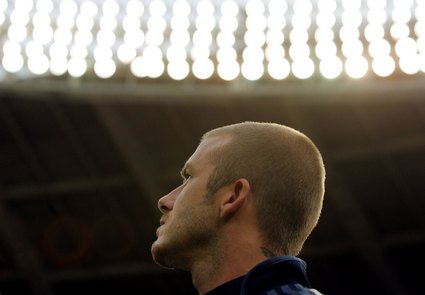 The Inconvenient Truth for Becks fans is that their hero is supposedly the least green person on the planet. As The Daily Star reported recently, ‘LA Galaxy star Becks, 32, not only owns a fleet of 15 gas-guzzling supercars [including a Porsche, Hummer and Lincoln Navigator], he has clocked up more than 250,000 miles in the air in the last year â€“ more than the distance to the far side of the Moon.
‘His hectic travel schedule has notched up a staggering 163 tons of CO2, compared with the 9.4 tons of the average Brit.’
A Carbon Trust spokesman said: ‘The amount of flying David does means he holds the dubious crown of having the largest carbon footprint in human historyâ€¦He has more freedom of choice when it comes to methods of travelling. He could also choose greener cars.’ Via The Offside