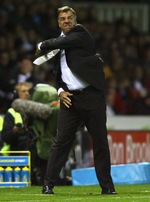 Big Sam Allardyce is right out of luck at the moment. Even if his Newcastle Utd side get past Stoke in their third-round reply, they will face Arsenal away in the fourth round – the only consolation for Sam is that Arsene Wenger may not put out a full-strength team for that game.
Elsewhere, Man Utd may face Tottenham at Old Trafford; that’s if Spurs can beat Reading at the Madesjki. A big if, admittedly, but I’m sure most neutrals would prefer to see Man Utd vs Tottenham than Man Utd vs Reading.
The other tie that stands out is Luton/Liverpool v Swansea/Havant & Waterlooville. It’s probable that Liverpool will play Swansea, but what a plum tie for Havant that would be.
Full fourth-round draw after the jumpâ€¦