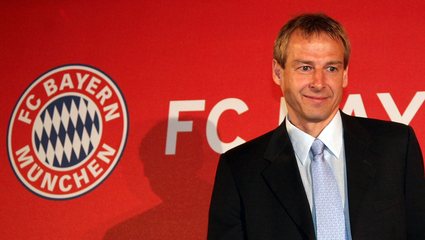 Bayern Munich have announced that Jurgen Klinsmann will be their new coach next season. The ex-Germany coach will succeed Ottmar Hitzfeld on July 1 as boss of the Bavarian giants. He said: “I know what I am letting myself in for here. The level of expectation only makes the job more fun.”
The former Tottenham striker is ready to quit life in the Californian sunshine to return to football management. Pies will be interested to see whether Jurg is that good a manager or whether he simply swept Germany to a World Cup semi-final on a tide of national euphoria on home soil.

Cash-strapped outfit KFC Uerdingen (they’re finger lickin’ good) have placed their manager’s post on eBay in an attempt to raise funds. The highest bidder will take charge of the bankrupt regional fourth division team for 24 hours to sample “all the joys coaching has to offer”.
The lucky coach will guide the team through a friendly match before immediately being sacked from their job (unless they have really impressed, presumably!). The eBay spiel stated: “Whether you’re an old school drill sergeant, an introverted tactical fox, an emotional motivator or a completely different kind of coach is entirely up to you.”