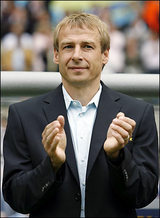 ‘In Klinsmann, Bayern are getting one of footballâ€™s few real galacticos, and theyâ€™re doing it on the cheap, compared to the tens of millions it would cost to bring in a Ronaldinho or Kaka.’ Reuters Soccer Blog
‘Handing the reins to the stubborn, unashamed reformist from Botnang, Stuttgart, is a risky move, but consistent with the club’s revolutionised transfer policy. Bayern used to buy safe – either the best of the Bundesliga rest or cheap foreigners – and hire safe hands for the bench. Klinsmann is untested at this level, but he has the appetite and energy to take them out of the comfort zone.’ Guardian Sport Blog

‘Klinsmann joined FC Bayern during the infamous FC Hollywood era (sort of Bavariaâ€™s Galacticos) with lots of drama and relatively little success. Bayern is in danger of heading into the same direction again. A series of smaller dressing room rifts have already been surfacing this season and Klinsmann will know what to do about it.’ The Offside
‘Klinsmann will take over Bayern starting next season, which should give him just about enough time to figure out how to convince Oliver Kahn to stay so he can bench him (I hear Jens Lehmann is available)â€¦ If there is a downside to all this it’s that his name can no longer be thrown around whenever a top post becomes available anywhere in the world.’ My Soccer Blog
‘I believe that there is danger of a conflict between the Jurgen and Uli. Klinsmann may see himself as an English style manager who takes control of many aspects of a club rather than focusing on coaching the team. If he tries to spread his influence at Bayern beyond the traditional remit of a head coach then he could end up treading on some pretty powerful and sensitive toes. In which case there could be a big, unseemly girlie fight. Could someone let me know when the tickets go on sale?’ Bundesbag