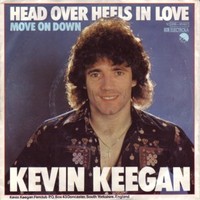 ‘No lover of English football will begrudge him [Keegan] the opportunityâ€¦ to write a new chapter in the history of an extraordinary club. The cavalier has entered the gates and the roundheads are in flight. It may all end in tears. But the noise when he makes his return on Saturday evening will be worth hearing.’ Guardian Sport Blog
‘Keegan is different: he wants more and the fans will back him in the way that they would never have backed Didier Deschamps or Gerard Houllier. The chances are, of course, that for all his force of will, Newcastleâ€™s title drought will roll into a ninth decade and, by measurement of the honours board, Keegan will fail. But for the revitalised Geordie fans who will go to work with an extra skip in their step today, they know they will have fun trying.’ Reuters Soccer Blog

‘I, for one, am mildly shocked, but shocked nonetheless. Whatâ€™s that line? â€œYou glorify the past when the future dries up?â€’ Argie-Bargie
‘A decade ago Keegan’s appointment as Newcastle boss brought entertainment but not a single trophy, unless I missed something. Why will it change ten years on? The task is even harder now with a wider gulf between Newcastle and the Big Four. I can’t imagine Kev’s a better manager now than then. Especially since he’s been playing golf for the last two years.’ Touchline Dad
‘The appointment of Keegan may not bring titles to Newcastle. He may not have the tactical sophistication to achieve that. But he will revitalise a demoralised team with long-suffering fans, and will instantly make the Premier League a lot more exciting to watch. From 1992 to 1997 Keeganâ€™s Newcastle set the template for the attacking football the Toon Army have come to demand from their team. His shock departure – he basically felt he couldnâ€™t take the team any further in 1997 – left fans and neutrals alike with a sense of what might have been. Eleven years later weâ€™re about to find out.’ The Offside
‘The expectations will be ridiculously high and thatâ€™s a shame because KK, and Newcastle United, deserve better. Hereâ€™s a club that needed massive rebuilding from the ground up, a club where the most recent rebuilding process was uprooted and thrown away because Mike Ashley wanted his own man in (Kev is probably better than Sam anyway, but only time and future Newcastle United performances will tell us for sure), and now the rest of the season will be spent rebuilding again.’ Soccerlens