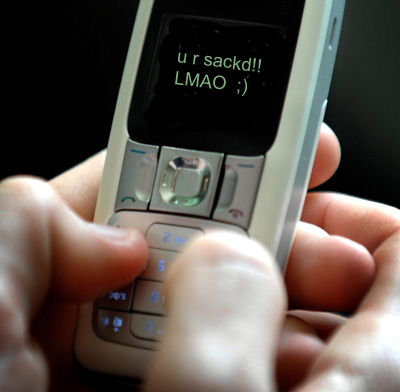 The world of football can be a cut-throat business, with managers and chairmen constantly forced to make difficult decisions which can affect a player or manager’s whole career. Usually the bad news is given face to face, with a quiet word in the gaffer’s office or a friendly chat in the boardroon. However, sometimes etiquette is jettisoned, leading to rather unfortunate situations.

Brazilian midfielder Gilberto was a victim of one such awkardly handled piece of man management, learning that William Gallas, rather then himself, was to be made team captain not by a friendly phone call from Arsenal boss Arsene Wenger, but rather by strumbling across the news on the Arsenal website. Another former Gunner, John Hollins, also experienced the sharp end of the business, learning that he was to be sacked as Rochdale boss by the less-than-personal medium of fax.

However, these tales of wrongdoing pale into utter insignificance in comparison to the sorry tale of Chichester City manager Mark Poulton.

Whilst watching his Sussex County League One side play a cup tie against rivals Redhill, Poutlon received a phone call telling him he was fired:

“During the second half I had a call from Gary Walker, one of the directors, who said he was sorry to interrupt me and then told me I’d been sacked.

It’s the most unprofessional and shambolic organisation I’ve ever been involved in. I’m deeply unhappy with the way I’ve been treated. I’ve built up a good squad and we’d started to get results.”

Managers beware – turn your mobiles off, or at least put them on mute, until the match is over.