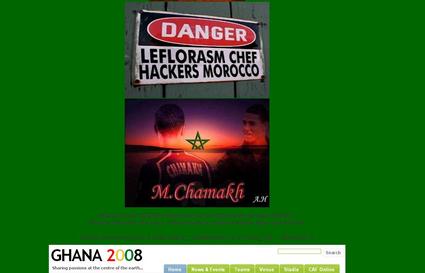 Morocco fans fuming from their country’s African Cup of Nations elimination have hacked into the tournament’s official website. The Ghana 2008 website’s fixture page now features three Moroccan-themed images and a message which reads: “Because of your STUPID Arbitration,You Got Punished By Moroccan Hackers, Revenge Token for The Lions.”
Morocco were knocked out of the tournament on Monday after a 2-0 defeat to the hosts. They had a goal disallowed in the match, but hackers are obviously not mathematicians as that would still have only made the score 2-1. Besides, Morocco were woeful (please don’t hack us though!).