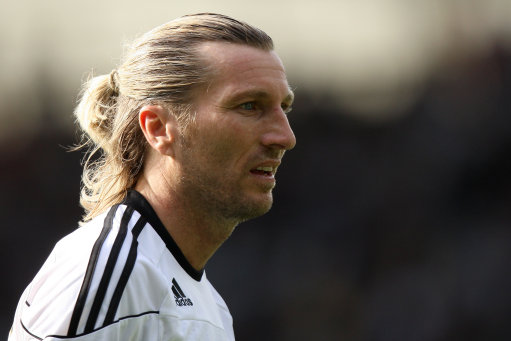 Gough, a presenter on talkSPORT, was discussing England’s options before their Euro 2012 qualifier with Montenegro last night, but Savage (who apparently counts himself as a bit of an expert when it comes to football’s subtleties) was not pleased with what he heard.

Below is a transcript of the argument, and a good example of what happens when the immovably clueless argue with the irresistibly moronic;

@RobbieSavage8: “Just in my mates car and he has a radio show on. it’s painfully bad a cricketer talking football tactics, wow I might do the Ashes.”

@DGoughie: “Hi pal, I’m a PFA and PCA member. When did you play cricket?”

@RobbieSavage8: “Mate 28,000 followers, well done. stick to cricket cos you no f**k all about football. All I know about cricket is you couldn’t bat!”

@DGoughie: “Not interested in trading insults, I’m a team player it’s not all about me? I have an opinion like everyone sometimes I’m right sometimes I’m wrong simple. I love what I do, fact.”

The thinking man’s feckless prick then waded in to defend his talkSPORT colleague;

@CallCollymore: “5 live offered me the 606 gig for this season,and I turned it down,because 606 has virtually a captive audience,and I get much more pleasure from what I’ve achieved with Call Collymore than I ever could from 606. If you’ve got it, you do your own, not piggyback on others.”

@AndyGoldstein5: “Why is Robbie Savage having a pop at talkSPORT? It’s like me playing for Derby and slaughtering Barcelona.”

@RobbieSavage8: “Can’t be bothered with nuggets like you who nobody knows pal. 600 games later I’m still there! I’ll tune in at 3am to you.”

@AndyGoldstein5: “dictionary definition of the word “nugget” : “anything of great value”…even when you insult me you get it wrong.”

@RobbieSavage8: “mate your just a soccer am reject. 1 season wonder, do one.”

…and it goes on, and on, and on – although Savage has moved to play the whole thing down with his first tweet of the morning today, saying;

@RobbieSavage8: “Can’t believe people don’t no what banter is. it’s fun, that’s what twitter is about. Goughie (sic) was a great cricketer who I respect!”