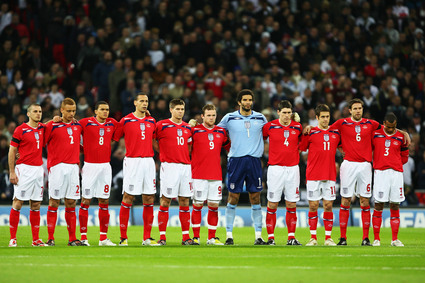 David James Didn’t have much to do. His handling and kicking was generally good, apart from one sliced clearance. Might have done a little better for the Swiss goal, but overall a sound performance from England’s best goalkeeper. 6
Wes Brown England’s worst player by a mile. Visibly on edge, his passing was dreadful and he was leaden-footed in defence. As far as I can see, he picks up international caps only because he plays for Man Utd. 4
Rio Ferdinand Didn’t seem happy to be sandwiched between Brown and Matthew Upson (would you?), and didn’t have one of his best games – although he was still comfortable for most of the evening. At fault for Switzerland’s goal, when he should have been more alert. 6
Matthew Upson Looked nervous in the first half, settled down a bit in the second. But did nothing much to suggest that he’ll keep his place when better defenders return from injury. 5

Ashley Cole Made a big effort to impress the new boss, running the line with enthusiasm. However, much of his play lacked intelligence. Booed as he came off for clubmate Wayne Bridge. 6
Gareth Barry Did the holding job asked of him adequately, but was never seen in attack – no doubt Capello urged him to keep his discipline. A low-key performance, but he did break up several Swiss attacks with minimal fuss. 7
Jermaine Jenas On this showing, the much-maligned midfielder may quickly become a Capello favourite – bags of stamina, loves to get forward, adds athleticism to the side. Deserved his tap-in goal. 7
Steven Gerrard Grew in stature in the second half, after a patchy first 45 minutes. Great pass to set up Shaun Wright-Phillips’ goal. 8 MAN OF THE MATCH
David Bentley From the first whistle, he was intent to make the England fans forget another David B. Sometimes tried to do too much on his own, but he settled faster than any England player – his natural confidence, not to mention his ability to pass with both feet, is a big plus for England. 7
Joe Cole A constant threat on the left, and cut inside with real purpose. Great footwork to set up Jenas’s goal. Substituted after 57 minutes, otherwise a candidate for man of the match. 8
Wayne Rooney Worked as hard as anyone, sometimes leaving his forward post too often. Flashes of typical brilliance but you could sense he was slightly frustrated to be playing up front on his own. 7
SUBSTITUTES
Shaun Wright-Phillips (for Jenas 57min) 7
Peter Crouch (for Joe Cole 57min) 6
Wayne Bridge (for A Cole 73min) 5
Owen Hargreaves (for Barry 73min) 6
Ashley Young (for Rooney 86min) 6