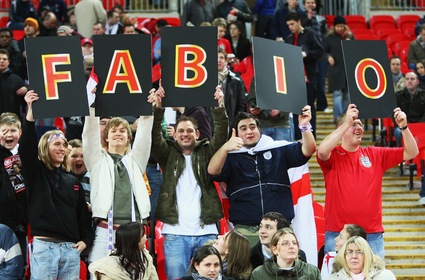 The blogging community’s verdict on England’s 2-1 win over Switzerland at Wembley, in particular the role of new boss Fabio Capelloâ€¦
‘Capello has already given England something different. This team will play in a different way to its predecessors. Players will be encouraged to keep the ball, pass over shorter distances and attack from imaginative angles. That, at least, is something to be celebrated, however cautiously.’ Guardian Unlimited
‘As tempting as it would be to lay it into Fabio Capello (alternatively, we could all renounce international football like some club football fans – you know who you are), this was Capelloâ€™s first game, and just as England under McClaren could not afford to celebrate after beating Greece 4-0, England under Capello cannot afford to wallow in their own piss after a dominant-but-unconvincing 2-1 win over the Swiss.’ Soccerlens

‘England limped through this underwhelming friendly with a stale, patchy performance, as they struggled to adjust to the 4-1-4-1 formation that Capello had asked them to play.’ Football Focus
‘Obviously itâ€™s good that Capello wasnâ€™t satisfied. While thereâ€™s a team being fashioned here, instead of a collection of individuals, itâ€™s clearly in its infancy. But there are positives to take forward, and I saw nothing that makes me think Capello isnâ€™t the right man for the job.’ Oh You Beauty
‘Distinctly average. Thatâ€™s how I would categorize Englandâ€™s performance for the majority of their 2-1 friendly victory over Switzerland tonight. Distinctly average. If the England players wanted to come out and set a positive tone to impress new manager Fabio Capello, Iâ€™d have to say that as a group, they didnâ€™t accomplish their goal.’ EPL Talk