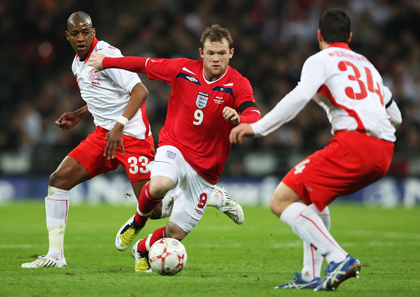 The term â€˜world classâ€™ is a difficult one to quantify, especially when itâ€™s over used by pundits every time a player does anything above average. We think that the world class club should be more exclusive than that and only reserved for a few players who are exceptional talents â€“ your Ronaldos, Messis and Kakas.
There isnâ€™t a club in the world that wouldnâ€™t want players like those in their team but, using that as a guideline, how many of Englandâ€™s squad could guarantee a place at clubs like real Madrid, Barcelona or AC Milan?

From Englandâ€™s starting XI last night, we would only name four players who would fit that category â€“ Ferdinand, Gerrard, Rooney and (possibly) Joe Cole. And, from the players missing, maybe Lampard, Owen and, for the nostalgic, Beckham could be in with a shout.
That would seem to leave us with a team of world beaters (if only they could all play to their potential at the same time) unless weâ€™re being too generous with our praise?
Let us know which England players you think deserve to be included in the world class bracket.