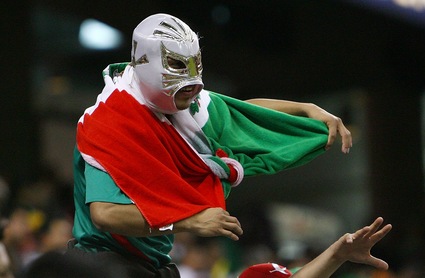 A Mexican fan, clad in de rigeur wrestling mask, cheers on his team during their 2-2 draw against arch rivals USA in a friendly international held in Houston yesterday. More than 70,000 fans turned out to watch the game.
A fine, looping header by Fulham reject Oguchi Onyewu gave the hosts the lead, but Magallonâ€™s first goal for Mexico, also a header, levelled the score five minutes later. Jozy Altidore restored the US’s lead, but they couldn’t hang on – Magallon scored his second of the game early in the second half.
Watch video highlights of the game, including all four goals, after the clickâ€¦