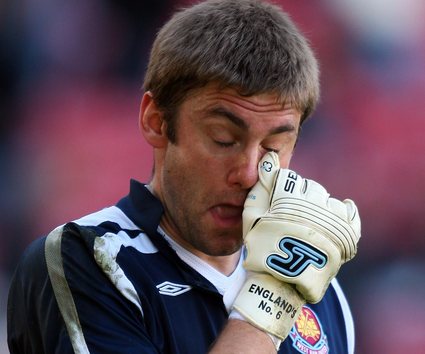 Pies respects a player who doesn’t take themselves too seriously. Inspired by a recent spate of banter around grounds involving several club’s fans claiming their keeper is ‘England’s number one’ and presumably by his omission from Fabio Capello’s first England squad, Robert Green was sporting a pair of customised gloves with the slogan ‘England’s No.6’ at the weekend. Class. Of course this poses the question who, in Robbo’s eyes, are England’s top five keepers? David James, Scott Carson, Chris Kirkland, Paul Robinson and Ben Foster?