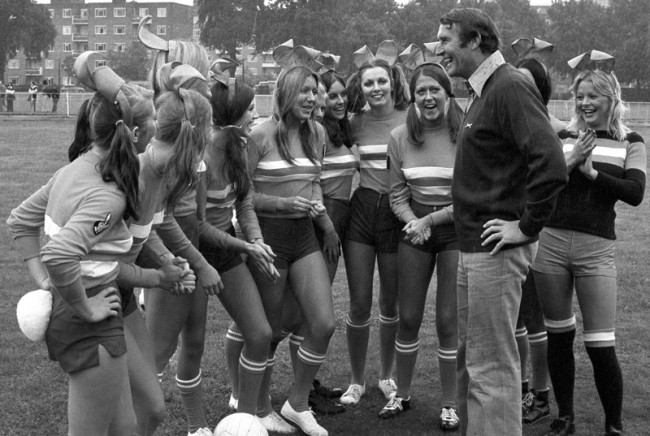 Allison and his many wives

Sad news: Malcolm Allison has passed away, aged 83. Big Malc was one of English football’s biggest characters of the last 30 years. In as much as we’d never seen a manager with a penchant for wearing fedoras and smoking cigars.

Mike Summerbee, who played under Allison at Man City, paid tribute to his former gaffer: “Malcolm changed football by making us train like athletes. In that respect he was ahead of his time and he was a great tactician as well.

“He was also one of the lads – in effect he was the 12th player from the sidelines but he knew how to crack the whip and we respected him.

“He was a great psychologist; he knew how to handle me and how to get more out of me. He did the same for Colin Bell, Francis Lee, Neil Young and all of that great side.”

Some fine photos of Allison from the PA archives (click to enlarge thumbs), including a kickabout with some Playboy bunnies: And we’ll leave you with a classic Allison quote:

“John Bond has blackened my name with his insinuations about the private lives of football managers. Both my wives are upset.”