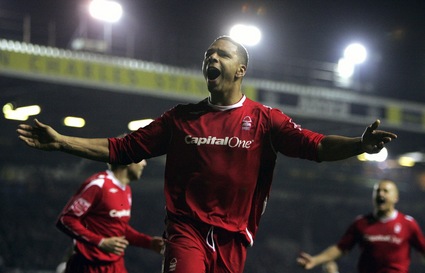 Julian Bennett of Nottingham Forest celebrates his goal during the League One match between Leeds United and Forest at Elland Road on 12 February, 2008. The clash of League One’s two biggest clubs ended in a 1-1 draw, after Jermaine Beckford’s late penalty cancelled out Bennett’s header. Forest lie fourth in the table, with Leeds in seventh, just outside the play-off zone.
Photo Matthew Lewis/Getty Images