It was business as usual in Serie A. Inter Milan stomped on towards the title with all the ruthless efficiency we have come to expect of them this season. A 0-2 win at Catania maintained Inter’s eight-point lead as they look like certainties to win back-to-back titles. Esteban Cambiasso and David Suazo were on the scoresheet
Inter’s San Siro flatmates AC Milan continued their steady climb up the Serie A table with a win and a draw this week. A goal from 18-year-old Alberto Paloschi gave them a 1-0 victory over Siena at the weekend. The young striker (pictured above) found the net just 18 seconds after coming on as a substitute. But Milan were held to a 1-1 draw at home to Livorno last night.

Beached whale spotted at the San Siro. Ronaldo has suffered another injury setback and is rumoured to be on the verge of retirement. He ruptured a tendon in his left knee last light against Livorno and will be sidelined for at least nine months. 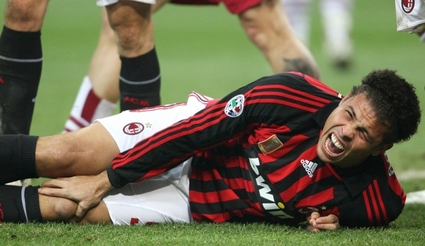