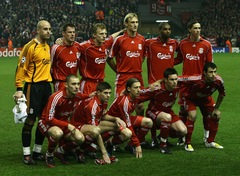 Watching Liverpool beat Inter last night reinforced the fact that Rafa Benitez has assembled a solid, professional squad. However, compare Liverpool’s strength to the squads of Chelsea, Man Utd and Arsenal, and it’s clear that they lack the quality to challenge the Premier League’s big three – one glance at the league table proves that. (Any notion of a Prem ‘big four’ is redundant, for now anyway)
How many of Liverpool’s first-choice XI would make it into the first-choice team of the big three? Fernando Torres, probably, and Steven Gerrard maybe – although with the likes of Michael Essien, Anderson, Paul Scholes, Cesc Fabregas, Frank Lampard and Michael Ballack for competition, I’m sure there are some Man Utd/Chelsea/Arsenal fans who wouldn’t even take Stevie G.
Apart from Torres and Gerrard, not one Liverpool player would trouble the first teams of the big three. Okay, you could make a case for Pepe Reina replacing Manuel Almunia, but the goalkeepers are on a similar level; Chelsea fans would keep Petr Cech and Man Utd fans have few complaints with Edwin van der Sar.

Everyone raves about Javier Mascherano, but is he really that good? Sure, he’s a very competent defensive midfielder, but his passing is average. I’d take Essien, Anderson and even Mathieu Flamini above him.
If he survives, Benitez needs a major clear-out in the summer. These are the players he should keep, and the ones he should ditch:
KEEP
Pepe Reina Done little wrong
Steven Gerrard No doubt he has a future at the club
Fernando Torres The jewel in Liverpool’s crown. Has to stay
Daniel Agger Liverpool’s most promising defender. When fit, is better than Carragher or Hyypia
Lucas Kept Xabi Alonso out of the team. One for the future, can only get better
KEEP BUT ONLY AS SQUAD PLAYERS
Ryan Babel The young Dutchman doesn’t convince me, despite flashes of brilliance. If he was that good, Arsene Wenger would have signed him three seasons ago
Steve Finnan Too slow and his crossing is not great. For a modern full-back, he’s pedestrian compared with the likes of Gael Clichy and Patrice Evra
Jamie Carragher There’s no room for sentiment. Liverpool need a world-class central defender to replace the ageing Carra
Alvaro Arbeloa Versatile defender who rarely lets the team down
Xabi Alonso What has he done to upset Rafa?
DITCH
Dirk Kuyt A workhorse, but simply not good enough. Would Ferguson, Wenger or Mourinho/Grant have signed him?
Jermaine Pennant Good enough for a mid-table Prem team, not good enough for a top-four team
Sami Hyypia Been a great servant to the club, but Arsene Wenger, for example, would have sold him two seasons ago
Andriy Voronin Why was he purchased in the first place? Obviously surplus to requirements at Anfield
Peter Crouch Forget the ‘great touch for a big man’ cliche. I repeat the question: Would Ferguson, Wenger or Mourinho/Grant have signed him? Crouchy is not quite good enough to cut it at the highest level.
Yossi Benayoun A very talented playmaker on his day, but too inconsistent. Liverpool should cash in on him now
John Arne Riise Too much perspiration, not enough inspiration. Can’t beat a man either. May score the occasional rocket goal, but that’s not enough at this level
Harry Kewell Nextâ€¦
Fabio Aurelio Would be better suited to Spain or Italy. Clearly has talent, but doesn’t seem comfortable at Anfield
So it’s back to the drawing board for Rafa, in my opinion. But is he a good enough talent spotter to build a new Liverpool team that can challenge for the title? Because, frankly, his current squad has too many weaknesses.