It has been an action packed week in Serie A with 20 games taking place since your last Gazzetta. Where to begin? The top met last night. Inter Milan and Roma shared the points in a 1-1 draw. Francesco Totti opened the scoring but Javier Zanetti equalised. Inter had previously dropped points at Sampdoria in a 1-1 draw, while Roma beat Fiorentina 1-0 courtesy of a Cicinho goal. All of this meant that Inter’s lead over Roma was reduced to a meagre nine points.
Another week, another Alexandre Pato goal. He opened the scoring against Catania last night, but AC Milan had to settle for a 1-1 draw. They did manage a 2-1 victory over Palermo at the weekend, but remain fifth in the league. Third-placed Juventus fell further behind Inter and Roma as they lost at Reggina and drew 0-0 in their derby match with Torino. Turin’s other team were probably exhausted from their 4-4 draw with Parma at the weekend. Another action packed match was Genoa’s 3-5 win at Udinese.

Italians in can’t defend shocker! It must be Torino 4-4 Parma.

It is all very well dressing up in your team’s colours, but not when you end up looking like a pimp. Just ask Fiorentina coach Cesare Prandelli. [Via Italy Offside] 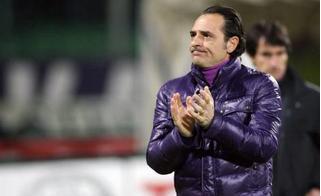