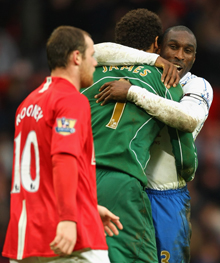 After this weekend’s giant killing exploits in the FA Cup, there will only be one top flight team (Portsmouth) in the semi-finals for the first time in a century – and it’s been 33 years since the final last lacked one of the big clubs from United, Chelsea, Arsenal, Liverpool, Spurs and even Everton.
While we all enjoyed the so-called ‘romance of the FA Cup’ dumping out the big teams, does it mean that the competition is now more important to the smaller clubs?
We’re used to seeing the Big Four field weakened teams in the FA Cup, which proved to be Arsenal’s undoing against Man United. But, despite playing virtually full-strength sides at the weekend, both United and Chelsea couldn’t muster the enthusiasm to turn their ties around (even if Fergie argues Portsmouth were playing with a twelfth man dressed in black).
Europe will always be a greater priority to the big teams and the unexpected exit of Chelsea and Man United will no doubt be softened by having more time to prepare for their forthcoming Champions League games. Then there are clubs like Middlesbrough whose lacklustre performance may have come with one eye still on a relegation battle.
Has chasing European titles or staving off relegation become more important to Premier League clubs than winning the FA Cup?