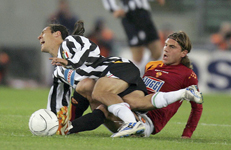 6. Who am I?
I was born in Amsterdam and given my professional debut in Holland by Johan Cruyff. I spent an unhappy couple of seasons at one of Milan’s clubs before becoming a Premier League icon and changing attitudes towards the game at a London club where I became the first Dutchman to be inducted in the English Hall of Fame.
Click through for the answers