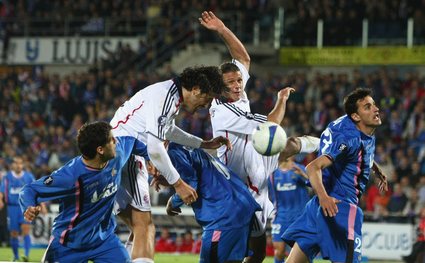 Bayern Munich striker Luca Toni put his side in the Uefa Cup semi-finals with a dramatic goal in the last seconds of their dramatic match against Getafe. With the scores at 1-1 from the first leg, Getafe had makeshift centre-back Ruben de la Red sent off after six minutes.
Despite being down to 10 men, the Spanish side took the lead through Cosmin Contra just before half-time. Franck Ribery equalised in the final minute to take the game to extra time. Goals from Casquero and Braulio early in the extra period seemed to have given Getafe an unassailable lead. But Luca Toni capitalised on a goalkeeping error to pull a goal back and then headed in the winner with the final touch of the game to take Bayern through on away goal. I strongly recommend you check out the highlights after the jump! Just an incredible match.