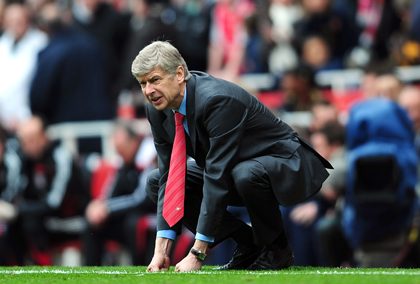 1. Money saved wisely?
Despite having money to spend, Arsene Wenger was typically frugal in the transfer market – losing Henry and only brining in Sagna and Eduardo as players of note. His decision gave the team unity at the start of the season but they have faltered towards the end with no one to replace injured or fatigued players like Eduardo and Rosicky.
2. Adebayour all alone
Adebayour has emerged from Henry’s shadow with more goals than most people expected but they have come in spurts and he hasn’t scored a Premier League goal in his last eight games and looks isolated up front, especially while Robin Van Persie has been out.

3. Bouncebackability
They say that great teams never lose two games in a row but since being overwhelmed by Man United in the FA Cup, Arsenal have struggled to win any games at all with five successive draws destroying their Premier League lead.
4. Eduardo’s injury
Eduardo’s horrific injury can also be blamed for Arsenal’s poor run of form and seeing their team mate come close to losing a leg obviously had an imp[act on the players – not least their captain William Gallas who has never quite recovered from his mini-meltdown.
5. The inexperience of youth
While Wenger has spent most of the season claiming otherwise, his young guns have shown that they still lack experience to turn their potential into trophies. Fabregas has noticeably faded while the manager still doesn’t appear to trust Walcott to start big games. They haven’t performed on the biggest games this season against Man United (FA Cup), Chelsea (Premier League) and Liverpool (Champions League).
If they don’t win against United this weekend then Arsenal’s season will be over – how long will we have to wait for this team to fulfill their potential?