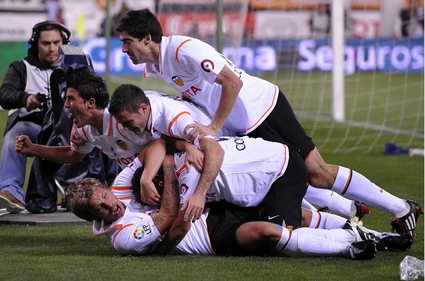 Valencia centre-back lexis Ruano (he’s in there somewhere) celebrates with teammates after scoring his team’s second goal during the Copa del Rey final between Valencia and Getafe at the Vicente Calderon stadium on 16 April 16, 2008. Valencia, who are facing a relegation battle in the Primera Liga, won 3-1, their seventh victory in the Spanish cup.
The defeat rounded off a terrible week for Getafe, who earlier lost to Bayern Munich in the quarter-finals of the Uefa Cup.
Photo Denis Doyle/Getty Images
Watch Fernando Morientes’s winning goal next…