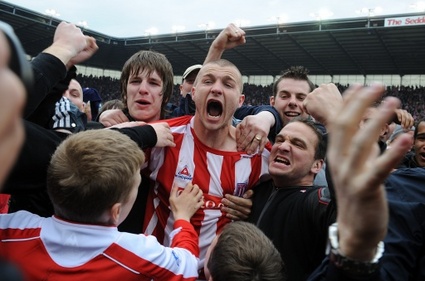 So, congratulations to Stoke City, who get to replace Derby County as the Premier League’s gimp.
Jon Parkin, Richard Creswell, Rory Delap, Leon Cort: these Stoke lads, journeymen through and through, clearly have what it takes to go one better than the Rams and end up with less than 10 points come the end of next season. I can hear Cristiano Ronaldo now: I don’t know where Stoke is on a map, but they’re gonna get f**ked harder than my sweet Nereida.
Feast on YouTube’s coverage of Stoke’s promotion…