Today’s best football news and rumours, brought to you in association with the letter ‘P’ and the number ‘5’ 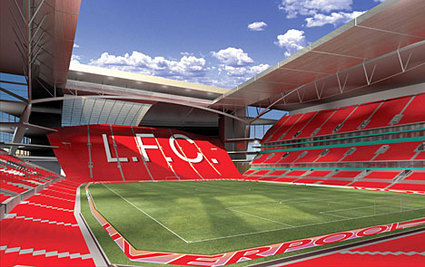 Liverpool’s revised plans for its Stanley Park stadium (pictured) have been approved by the city council, at last. Anfield will now be redeveloped as a car park, sports centre and hotel. [BBC]
Arsene Wenger reveals summer spending plans – he wants a centre-back and a creative midfielder. Any suggestions? [F365]

Real Madrid step up interest in Cesc Fabregas, saying they will pay up to Â£35m for the Spanish star. Arsene Wenger not amused. [Mirror]
Thaksin Shinawatra has given his approval for a Â£3.2m annual pay packet for Luis Felipe Scolari, but the current Portugal boss is reluctant to commit to a new job before the end of Euro 2008. [Guardian]
Portsmouth have revealed that Sol Campbell will leave the club this summer. Sol may be replaced by Benfica defender Luisao in a Â£12million deal. [Teamtalk]
Michael Ballack will be rewarded with a new three-year contract by Chelsea in recognition of his outstanding contribution to the second half of their season. [Times]

Avram Grant is happy to step aside and let Frank Rijkaard take his job as Chelsea boss. [The Sun]