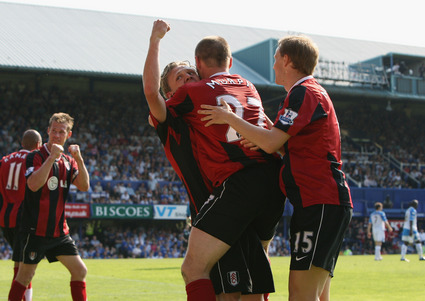 HEROES
Danny Murphy Scored the priceless goal against Portsmouth that kept Fulham in the Premier League.
Ryan Giggs Wrapped up his tenth Premier League winners’ medal with a goal in his record-equalling 758th Manchester United appearance.
Birmingham Put in a valiant last day display to defeat Blackburn 4-1, but Fulham’s heroics meant it wasn’t enough.
VILLAINS
Steve Bennett Should have sent Paul Scholes off for a second bookable offence and bottled it.
Petr Cech As Chelsea lost out on the title, their keeper managed to take John Terry out of the game.
Manchester City City’s players were supposed to be proving that Sven Goran Eriksson was the right man to have at the helm. An 8-1 defeat at Middlesbrough was not what the occasion called for.