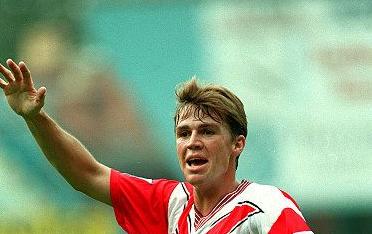 THEN: Ronnie Ekelund has the strange claim to fame of having played Premier League football for two seasons without ever having signed for a Premier League club. The story goes that Barcelona boss Johann Cruyff and his old friend Alan Ball, then Southampton manager, were reunited when the two clubs stayed at the same hotel. When Cruyff asked his old mucker what he would like as a parting gift, Ball replied: “A left-sided midfielder.” He woke the next morning to find a Barcelona tracksuit-clad Ekelund waiting in the lobby. The Dane soon linked up well with Matt Le Tissier and made an impressive start to his Saints career. He scored five goals in 17 appearances. A permanent move never materialised because Ekelund refused to have surgery on a back injury. He had brief loan spells at Manchester City and Coventry City, but injuries prevented him making an impact.

NOW: Ekelund ended his playing career on a high with a hugely successful spell in the USA with San Jose Earthquakes. He recently rejoined the Earthquakes as a member of the coaching staff. Ronnie and his English wife Claire are also the team behind Bebe au Lait and the fantastically named Hooter Hiders, both of which are companies offering equipment to make breastfeeding more discreet.