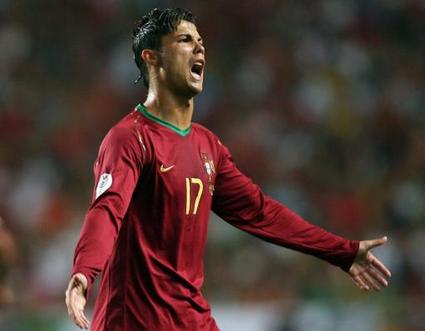 PORTUGAL (Group A)
Group-mates Turkey (7 June, Geneva), Czech Rep. (11 June, Geneva), Switzerland (15 June, Basel)
Three most valuable players 1) Cristiano Ronaldo After Lionel Messi C-Ron is the most dangerous attacking force in football. If he wants to be remembered as a true great, he must shine in this tournament 2) Ricardo Carvalho The Chelsea defender is truly world-class and seems to relish the big occasion; he was immaculate at Euro 2004 3) Ricardo Quaresma Outrageously talented and tricksy, but also hugely inconsistent and somewhat immature for his 24 years – he’s older than C-Ron, but seems younger. Needs to step up.
Hard fact Portugal is the 28th least corrupt nation in the world.

What the media say “The indestructible Ronaldo is so good he could win Euro 2008 on his own if he is in the right mood, but he certainly has the players around him to help him go all the way. Probable semi-finalists, possible winners – if they believe it.” [BBC Sport]
What the bookies say Most bookies have them as fourth favourites, at around 7/1. Not a tempting price, given the open nature of the tournament.
Pies predicts It’s all about Ronaldo, a rare player capable of winning matches almost on his own. How will teams deal with him? Is he jaded after such a long season? Will he sulk or shine? Without a firing C-Ron, Portugal will not win the tournament, purely because I can’t see where they will get their goals. At least they have a relatively easy group, so they should make the knockout stages. Semi finalists, but no more, I say.
Shit Lookalike C-Ron & Astro Boy