Pies’ headline of the day! 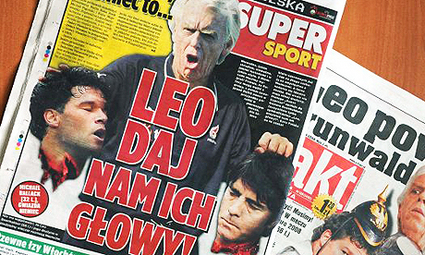 Leo Beenhakker, the Dutch coach of Poland’s national team, apologised yesterday after a Polish tabloid newspaper, Super Express, published a mocked-up image of him holding the severed heads of Michael Ballack and German coach Joachim Low, along with a headline demanding the slaughter of Germany at Euro 2008: “Leo, give us their heads!”
Beenhakker said it was “mad, dirty and sick” and apologised to Germany, on behalf of Poland’s squad. “We want to say sorry to the German people,” he said.
Germany’s tabloid Bild responded by claiming that Poland had declared war against Germany and calling it “disgusting”.
And you thought the British tabloids were bad.
[Guardian Unlimited]