Another sad story of in-fighting and underachievement? 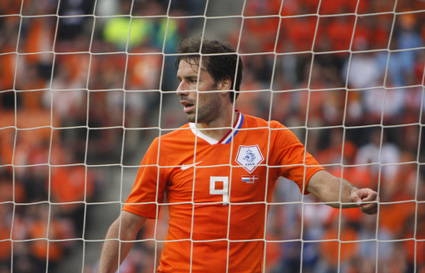 HOLLAND (Group C)
Group mates Italy (9 June, Bern), France (13 June, Bern), Romania (17 June, Bern)
Three most valuable players 1) Edwin van der Sar Vastly experienced and cool of head, unlike many of his young team-mates. 2) Rafael van der Vaart I was going to name Arjen Robben, but he’s more fragile than a racehorse and is now unfit to face Italy later today. So instead, I’ll list a more robust creative midfielder, namely the talented van der Vaart. 3) Klaas Jan Huntelaar The gifted striker may have to be content to start the tournament on the bench, as deputy to Ruud van Nistelrooy, but as the tournament unfolds, the Ajax man will surely make his mark.
Hard fact The Dutch team feature the longest one-two move in history. As in: “Klaas Jan Huntelaar plays a one-two with Jan Vennegoor of Hesselink…”

What the media say “The cruel draw makes it impossible to back them but, despite what Cruyff and other professional grumblers might say, they are still the team to watch. Even if some of the entertainment value stems from the inability to defend properly.” [Guardian Unlimited]
What the bookies say Available at a best-priced 14-1, longer odds than you might expect, although I still wouldn’t back them at that price.
Pies predicts Such a tricky group, and their defence is strictly average. That said, I think they will sneak into the last eight, as runners-up to France. Second in group
Shit Lookalikes Dirk Kuyt & Rocky from the movie Mask