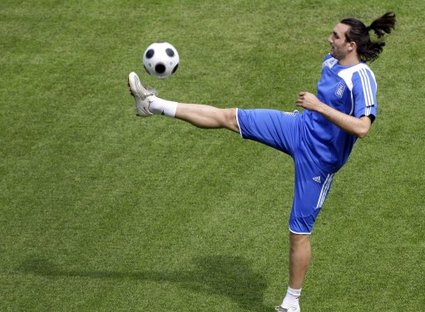 GREECE (Group D)
Group mates Sweden (10 June, Salzburg), Russia (14 June, Salzburg), Spain (18 June, Salzburg)
Three most valuable players 1) Giorgos Karagounis Proved his immense worth to Greece at Euro 2004 – he’s a clever, dynamic, tenacious midfielder, although at 31, he’s less dynamic these days. 2) Fanis Gekas The striker has thrived in German club football, and scored five goals for his country in Euro qualifying. 3) Giourkas Seitaridis Another stalwart from Euro 2004. He was injured for a lot of last season, thanks to operations on troublesome achilles tendons, but he’s back to full fitness and will offer the Greeks a solid foundation at right back.
Hard fact They finished the qualifying campaign for Euro 2008 with 31 points – more than any other team.

What the media say “On occasions, and for no good reason, this Greek team go missing. They were humbled by Steve McClaren’s England at Old Trafford, trounced 4-1 by Turkey in Athens, and were recently given a footballing lesson by Hungary. If that Greek side turn up, even for 45 minutes, then Rehhagel’s mission to retain the European Championship title will crumble as quickly as a slice of feta. In truth, the semi-finals look beyond them.” [Guardian Unlimited]
What the bookies say They don’t fancy a second lightning strike in four years. Available at around 33/1.
Pies predicts They’ve gone with a very similar squad to the one that won Euro 2004, which in terms of experience must be a good thing; in terms of energy and stamina, it’s a bad thing. All of the teams in Group D, including Greece, could win the group, and you can bet that the defending champs will put up a robust defence of their title. However, I honestly can’t see them getting out of their group – but I would have said that lasst time around, so you never know. That said… Bottom of group
Shit Lookalikes George Clooney & Antonis Nikopolidis 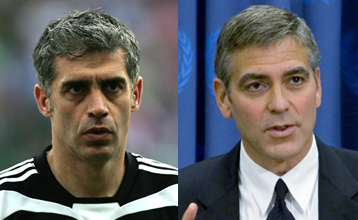