Will Guus Hiddink guide the Russians to glory? 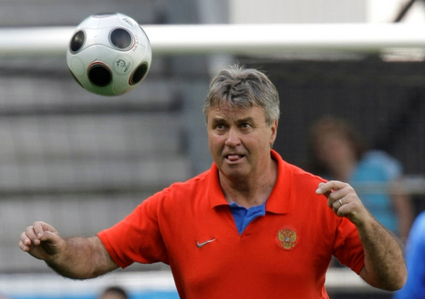 RUSSIA (Group D)
Group mates Spain (10 June, Innsbruck), Greece (14 June, Salzburg), Sweden (18 June, Innsbruck)
Three most valuable players 1) Igor Akinfeev Brilliant young goalie, with a nice line in saving penalties. 2) Andrei Arshavin Twinkle-toed playmaker, so important to his country’s hopes that he was included in the squad, despite being banned for the first two group games (he picked up a red card against Andorra in Russia’s final qualifying game). 3) Konstantin Zyryanov The midfielder showed his class in Zenit’s successful Uefa Cup campaign this season. Voted Russian Footballer of the Year in 2007.
Hard fact The old Russia won the inaugural Euro Championship, in 1960. Since then they have lost in the final three times, in 1964 1972, and 1988.

What the media say “Russia could be out before their best player [Arshavin] even takes the field, but if they are not, there is just a chance that they could add to what Putin has already termed Russian sport’s golden age. It’s a slim chance admittedly, but even making it through the groups would be a new best since fragmentation.” [Guardian Unlimited]
What the bookies say 25/1 is the best price you’ll get.
Pies predicts Guus Hiddink is the key. He is one of the best coaches in the world, as he proved in getting Russia to the Euros, at the expense of England. Russia’s squad is nothing special, but we all said that of Greece last time out. Team spirit counts for a lot at major tournaments, and there’s no doubt Hiddink will make sure his squad is on message. They may struggle without the influential Arshavin, but I believe they will go through to the last eight. Second in group, then losing quarter finalists
Shit Lookalikes Oliver Twist & Andrei Arshavin