Holland can play part in France & Italy’s demise. But should they? 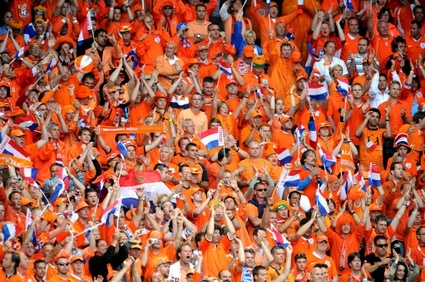 If Romania beat Holland this evening, France and Italy will go out of Euro 2008.
That’s the simple equation.
Normally, I’d favour the Dutch to beat the Romanians, but the thing is, they really don’t need to. Marco van Basten’s side are already guaranteed a place in the quarter finals, thanks to fine wins against the two World Cup 2006 finalists. Why should Van Basten risk his best players picking up an injury or a card in a match where the result doesn’t count; that’s not to say the result doesn’t matter, as a defeat – even in a “meaningless” match – is never good for morale.

Both the French and Italian camps are shitting bricks that Holland will play a weakened team against Romania. The Italians, particularly, are worried about a repeat of Euro 2004, when Denmark and Sweden drew their final group game 2-2 – the only result that could have eliminated the Italians.
Italian midfielder Daniele De Rossi said: “The biscotto [biscuit, the Italian slang for a fix] is a worry and will be in our heads because, even during the game, you are always thinking a little bit about the other result… But I do not have fears about Holland. I trust their professionalism.”
Roberto Donadoni and Raymond Domenech, the Italian and French head coaches respectively, must be concerned at Van Basten’s suggestion that he would look to make the most of his 23-man squad in tonight’s match: “We’ll put out the best formation we think can play Romania,” Van Basten said.
For example, that could mean no place for the impressive Wes Sneijder, and a rest for workhorse Dirk Kuyt. Andre Ooijer and Nigel de Jong, both on a booking, may also sit out.
And why not? Each nation has a 23-man squad for a good reason, and there’s every reason why the Dutch should make the most of their resources. Frankly, screw what the French and Italians think – they should have done better in the first two group games.
If I was Van Basten, I’d play whatever team I want, and if that means resting star players, so what?
Do you think it’s fair for the Dutch to play a weaker team against Romania? Vote below…